AOR Update: Will the Consumer Bend or Break?

Investors have endured one of the worst starts to the year, with the first five months of 2022 ranking as the sixth worst performance for equities since 1928. The second quarter has been particularly painful, with April and May seeing the first run of seven successive weekly declines since the bursting of the dotcom bubble in 2001. Late May finally saw the markets bounce when the FOMC minutes conveyed a message that was less hawkish than some feared, and the S&P 500 Index finished flat (+0.18%) for the month.

We continue to believe that a “softish” landing for the economy is the most likely path forward, with a strong consumer bolstered by accumulated savings, compensation gains and ample borrowing capacity. The financial position of households, however, is beginning to worsen as inflation is pushing spending up faster than incomes, driving the savings rate down to 4.4% last month, its lowest level since the depths of the Global Financial Crisis in 2008. Consumers are beginning to bend, but we do not believe they will break.

Exhibit 1: Savings Save the Day 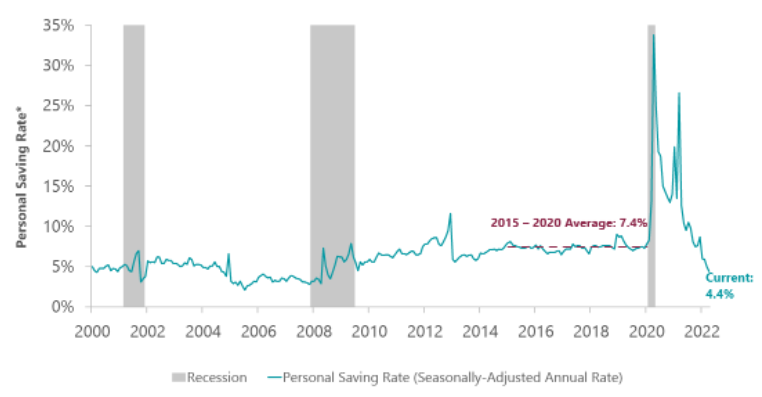 Accordingly, the ClearBridge Recession Risk Dashboard has no indicator changes this month and continues to flash an overall green expansion signal, despite some weakening of Profit Margins and Retail Sales indicators. We are closely monitoring three indicators in the consumer section of the dashboard — Housing Permits, Wage Growth, and Jobless Claims — for signs that Fed tightening is slowing demand and cooling inflation. The housing market is a key avenue through which monetary policy can impact the economy and we see early signs of this taking effect. Thirty-year fixed rate mortgages have risen from 3.1% at the start of the year to 5.1% in late May, causing the monthly mortgage payment for the median home to increase by 27%. When home price appreciation is factored in, the monthly mortgage payment on the median home has risen 40% year to date, a meaningful hit to affordability. For now, home prices remain strong and, given backlogs, housing activity is forging ahead. Building permits fell modestly in April but remain healthy year over year. A cooling housing market would be a welcome development for inflation (and the Fed) but this will take some time to show up in CPI. Importantly, inventories remain quite low, providing some downside support for housing prices during this normalisation process.

The labor market is a second area we are scrutinising for signs that the Fed is dampening inflation. Slowing wage gains should help curb demand, given the close historical relationship between compensation, consumption and inflation. We focus on aggregate weekly payrolls, which looks at both wages and hours worked and is currently at an elevated 10%. 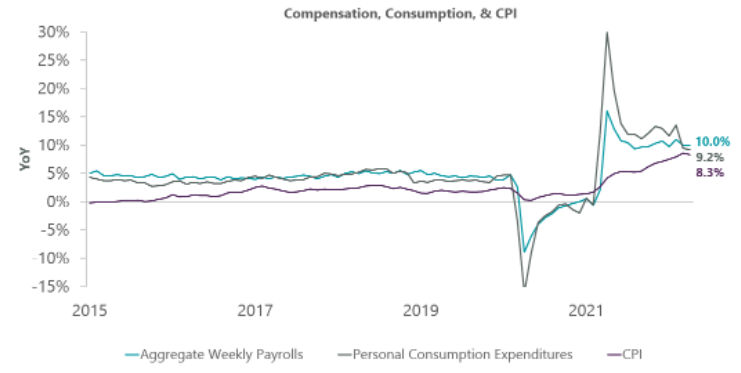 Typically, the Wage Growth indicator on the dashboard turns red as the economy transitions into the late-cycle phase and remains so until a recession occurs. However, this cycle began with wages in red territory. Keep in mind that this cycle has been anything but ordinary, given a start-stop recovery derailed by rolling pandemic waves, so historical analogs are less useful.

Given the uniqueness of this cycle, the Fed may have a fighting chance of bringing down wage growth without causing a recession. This could occur from both sides, with workers re-entering the labor force at the same time that companies lower their demand for labor as they look to right-size their operations after a period of dramatic hiring. There have been a number of high-profile hiring freezes and some layoffs announced, primarily in technology. Although the Job Openings and Labor Turnover Survey (JOLTS) remains elevated, high-frequency (and unlagged, unlike JOLTS) job opening data from indeed.com and Revelio Labs suggest labor demand is cooling. The ISM Manufacturing survey’s employment sub-component slipped into contraction territory (49.6) in the most recent release.

While announced hiring freezes and layoffs have been focused in the technology sector so far, investors should be focused on signs of spread into other industries. Initial jobless claims have begun to move higher, rising from a low of 166,000 in mid-March to 200,000 in late May. Initial jobless claims tend to rise as a recession begins, making the current uptick concerning. However, it is important to remember that claims are bouncing off their lowest level in 53 years: some normalisation was likely. Year over year, which is how they are evaluated in the dashboard, claims are down 53%.

Initial jobless claims will likely be a good barometer of just how much damage tighter monetary policy is having and if the Fed is able to steer the economy toward a softish landing. As the cost of money rises, companies should continue to demand less labor as they curb their expansion plans in the face of higher costs. Whether this results in fewer job openings or substantially more layoffs remains to be seen.

Importantly, wage gains already appear to be moderating with the run-rate from the last three months slowing to 3.7% from 6.1% at year-end. As companies right-size operations and workers return to jobs, a better balance between supply and demand should cool wage growth. A meaningful deceleration in the pace of wages and inflation could give the Fed comfort to slow the pace of monetary policy tightening later this year, which could help assuage some of the anguish equity investors are currently feeling. This is unlikely to play out in the near term: the Fed is somewhat data-independent barring a “break the glass” moment as they work to bring the fed funds rate back toward neutral in the face of too-high inflation before reassessing conditions. As a result, we believe long-term investors should remain patient as we continue to move through The Year of Transition.