Anatomy of a Recession: Waiting for a Pullback?

As we enter the weaker seasonal period of the calendar for equity markets, something several friends said last summer comes to mind: they were waiting for a pullback to deploy cash. This mindset can be fraught with peril, as no one can time the market. Although some may be lucky enough to catch an occasional top or bottom, few can consistently outperform with this strategy. Even with perfect foresight, a market timer may not do so well. Consider an investor who goes to cash 10 months prior to the market top but then reinvests 10 months following the trough. Compared with an investor who stayed fully invested through the ups and downs, our hypothetical market timer would have earned just one-third of the cumulative buy-and-hold return over the long haul (Exhibit 1) and during the more recent COVID-19 crisis would have missed out on a 28.8% return for the S&P 500 Index over that 20-month period.

Even waiting for a smaller pullback as an entry point can lead to greater foregone gains than savings accrued. This is particularly true recently, with the S&P 500 having not experienced a 5% pullback in over eight months while rallying 31.4% from October lows. This run has come against a backdrop of robust economic and corporate earnings growth, along with supportive fiscal and monetary policy. Such a burst of economic activity is also evident in the ClearBridge Recession Risk Dashboard, which has all 12 underlying indicators flashing a green expansionary signal. Furthermore, recent overall dashboard readings are among the strongest in history. Data as of June 30, 2021. Source: Yardeni Research. Past performance is not a guarantee of future results. Investors cannot invest directly in an index, and unmanaged index returns do not reflect any fees, expenses or sales charges. Data as of June 30, 2021. Source: BLS, Federal Reserve, Census Bureau, ISM, BEA, American Chemistry Council, American Trucking Association, Conference Board, and Bloomberg. The ClearBridge Recession Risk Dashboard was created in January 2016. References to the signals it would have sent in the years prior to January 2016 are based on how the underlying data was reflected in the component indicators at the time.

Many market participants may be worried the current environment is “as good as it gets.” From an economic momentum or earnings growth rate perspective, the current environment is likely to give way to a period of slower but still robust activity. Measures like GDP as well as leading indicators such as the ISM Manufacturing PMI survey are likely to slow over the coming year, in part because the current bout of strength is “making up” for the weakness seen at this time last year. A common rule of thumb is for investors to get defensive when PMIs peak because the survey tends to lead GDP growth by two quarters, but the data shows there may be more to the story. When PMIs stabilise at high levels, market returns have historically been fine. With the most recent reading coming in at 60.6, this could certainly be the case over the summer. Perhaps more importantly, history suggests that the real worry for equity markets comes when manufacturing declines substantially from levels above 60, a scenario which is not our base case. GDP growth in the second half of the year, for example, is expected to remain robust, with consensus forecasts for 7.0% in the third quarter and 5.0% in the fourth quarter, following the second quarter’s expected 10.0% growth rate.

Exhibit 3: Lower but Still Solid Manufacturing Activity a Plus 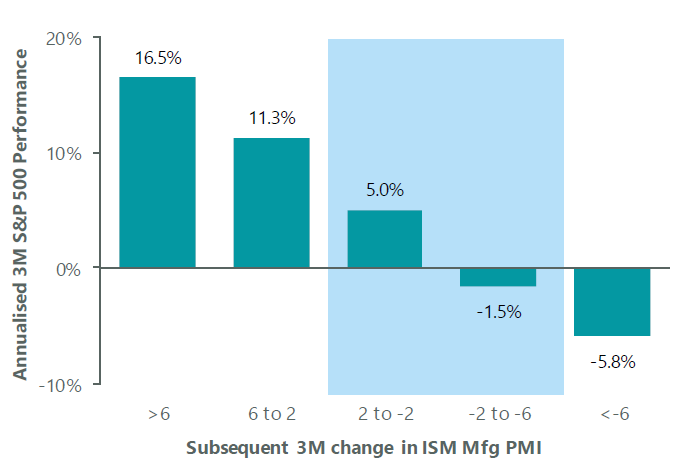 Data as of June 30, 2021. Source: ISM, S&P, and Bloomberg. S&P 500 annualised return based on starting ISM level (when over 60) based on change in ISM over next 3 months also looking at next 3 months S&P return (then annualised), 1950 – present. Past performance is not a guarantee of future results. Investors cannot invest directly in an index, and unmanaged index returns do not reflect any fees, expenses or sales charges. Note: *Expected EPS growth. Peak EPS based on YoY trailing EPS growth. Source: Haver, S&P, Bloomberg. Past performance is not a guarantee of future results. Investors cannot invest directly in an index, and unmanaged index returns do not reflect any fees, expenses or sales charges.

This dynamic often plays out approximately one year following a trough in the economic cycle. While the National Bureau of Economic Research has not yet officially declared the recession to be over, the ClearBridge Recovery Dashboard flashed a green overall signal exactly one year ago and many economic indicators appear to have bottomed around mid-year 2020 as well. This would suggest that the end of the early cycle phase of the new expansion has arrived with a handoff toward mid cycle currently underway. There are compelling cases that this transition has already occurred, as well as others that suggest it will not happen for another few months. Even though this can only be known in hindsight, historically the handoff has been accompanied by a period of market consolidation. The S&P 500’s upward trajectory has slowed since mid-April and history would suggest we may have to wait before the next leg higher. Data as of June 23, 2021. Source: FactSet, S&P Global. Past performance is not a guarantee of future results. Investors cannot invest directly in an index, and unmanaged index returns do not reflect any fees, expenses or sales charges.

Other factors have also been contributing to making recent equity markets rangebound. One is the perceived shift in Fed policy. While markets may have been initially spooked by the shift from zero to two rate hikes in the latest dot plots as well as the perception that the Fed was stepping away from its new average inflation targeting framework, it appears that these worries have been shaken off in the last few days. As investors continue to try and discount the Fed’s next steps, the potential for further volatility remains.

A second weight on markets could be the possibility of an inflation scare this summer. Even though bond investors appear comfortable that inflation will prove transitory, based on the path and level of both 10-year Treasury yields (1.47%) and 10-year breakeven inflation rates (2.34%), most equity investors appear less sanguine. While our base case is that price pressures will ultimately abate, they could get worse before they get better. Inventories remain low while supplier delivery times and backlogs are near multidecade highs, according to the latest ISM survey. Further, some of the “sticky” components of inflation —notably rents — are also starting to accelerate. Finally, wages have been increasing, primarily in industries that were most impacted by the pandemic, such as restaurants, though a clear picture of the labor market likely won’t emerge until fall, when schools reopen, providing effective childcare, and expanded unemployment insurance benefits roll off.

With continued uncertainty through the summer, market churn could continue. An equity setback should be viewed as a buying opportunity for several reasons. First, the Conference Board’s Leading Economic Indicator index (LEI) is at levels that have historically been followed by strong returns. Periods following top-decile LEI readings (like today) have seen the S&P 500 rally 7.5%, on average, over the subsequent six months. Although May’s latest print edged slightly lower than April’s, activity remains robust at 14.7% year-over-year (firmly in the top decile) with seven out of 10 subcomponents registering increases in the month. Data as of June 18, 2021. Source: Conference Board, FactSet. Past performance is not a guarantee of future results. Investors cannot invest directly in an index, and unmanaged index returns do not reflect any fees, expenses or sales charges.

Second, an old friend of equity investors has returned after a year-long absence: share repurchases. Year to date, nearly $400 billion in buybacks have been announced by S&P 500 companies. If this pace can be maintained through year end, it would be the second-largest amount on record, behind 2018, when the Tax Cuts and Jobs Act’s repatriation of overseas earnings led to outsize return of capital to shareholders. While Fed stimulus will likely wane in the back half of this year, buybacks appear to be just getting started, particularly given the excess cash reserves many companies have on their balance sheets.

Exhibit 7: Corporate Stimulus Not Over Yet: S&P 500 Buyback Announcements

Full year for 2021 is YTD annualised. Data as of June 30, 2021. Source: JP Morgan. Past performance is not a guarantee of future results. Investors cannot invest directly in an index, and unmanaged index returns do not reflect any fees, expenses or sales charges.

Corporations aren’t the only ones clamoring to purchase equities; investors are too. Flows into global equities this year are on pace to reach $1.18 trillion, according to Bank of America. To put this in perspective, such an annual pace (if achieved) would be more than 1.5 times the total flows into the space during the last 20 years combined! This has pushed valuations higher, although given strong economic and earnings growth, equities may ultimately grow into current multiples. With growth robust and interest rates low, the current backdrop marks a shift from the last cycle when both growth and rates were anemic, which triggered investors to direct their capital toward bonds at the expense of equities.

One reason for this new paradigm could be the expectation of higher economic activity on the horizon as consumers across the globe deploy excess cash reserves in the coming years. Global economic activity may resemble a relay race with the baton passing first from China to the U.S., and then onto the U.K., Japan and Europe in the coming quarters. This is a result of how COVID-19 has spread and the relative success of national vaccination campaigns causing countries to emerge from the pandemic at different points. Regardless of when various countries normalise, global household balance sheets are healthy as individuals have accumulated excess savings due to government stimulus and an inability to spend. This unprecedented increase in savings should fuel the global economy as the reopening plays out in stages.

While government support has been a large driver of the recovery, underlying organic growth drivers are robust as well. Strong job creation, increasing hours worked and wage gains should all support healthy income growth as stimulus wanes. Combined with excess savings and higher net worth, the consumption outlook remains robust and is likely underappreciated in current economic and earnings growth estimates.

In addition to consumption growth, business investment should also rise. Capital spending tends to follow stronger expected demand, as businesses expand to meet perceived needs. At present, U.S. inventory to sales ratios are just above all-time lows seen in 2011, and well below pre-COVID levels. This suggests a restocking cycle could play out in the coming quarters. Many businesses will likely choose to expand into this period of strength, with strong earnings translating into excess cash that can be reinvested into the business. As businesses deploy capital, economic growth could remain higher than expected even if consumption begins to ebb. Data as of March 31, 2021. Source: Bloomberg, FactSet, Federal Reserve System. Past performance is not a guarantee of future results. Investors cannot invest directly in an index, and unmanaged index returns do not reflect any fees, expenses or sales charges.

While those waiting for a pullback will eventually be vindicated, no one can know when. We see the inevitable pullback as an attractive entry for long-term investors. Equities have the support of not only an optimistic outlook for economic and earnings growth in the coming years, but also stronger consumption and capital spending.